Here are some shots of our favorite instruments that we personally own and play.
We hope you enjoy the pics and the stories! 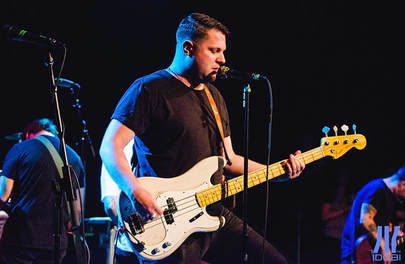 On the left is John's beloved "Mariano", a Fender Heavy Relic '59 P Bass custom spec'd. It sits at 8 lbs and is the loudest, most growly, awesome P Bass on the planet.  John used this bass live often, pictured here.

On the right is Dan's  Fender AM Vintage Series '57 P Bass. This instrument is among Fender's first attempt at vintage reissue instruments, and its a beast! It has some knicks and has revealed itself as an early 80's "color over color". 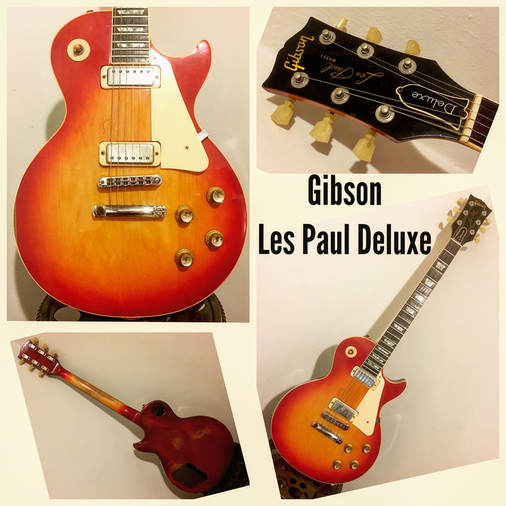 Being a huge Thin Lizzy fan, I had to get my hands around one of these and rip some of those classic songs in my spare time. This guitar was played to hell by whomever had it before me, with nearly all of the finish played right off the back of the neck, exposing the 3 piece maple design of the mid 70's. Most purists hate these guitars because of the hideous 3 piece tops, and multiple laminated bodies and necks, but I must say that maple neck gives it a snappier tone, that I think is crucial to the
​mini buckers LP Deluxe sound. This one is a "fretless wonder" for sure with a thin neck, but its super fun to play.  - John 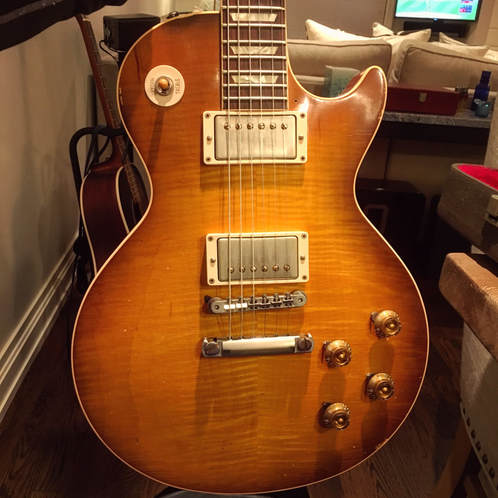 Dan picked up this amazing Les Paul while we were both working at a high end music retailer that specialized in Gibson Custom Shop guitars. Once we played this guitar and realized it was one of the best les pauls  we have ever played, we knew one of us had to pick it up. We later discovered that this guitar has quite a back story and was one of the prototypes for a very famous guitar player's "number 2" guitar. But we aren't supposed to tell anyone that...whoops! 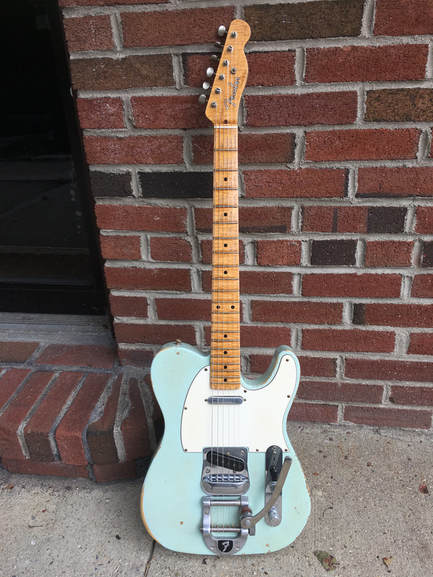 Dan acquired this one back in 2005. This guitar was one of the prototypes for the "Twisted Tele" run. Its a work of art for sure, but plays like a dream and sounds incredible. This one is for sale.
Please contact us for more info. 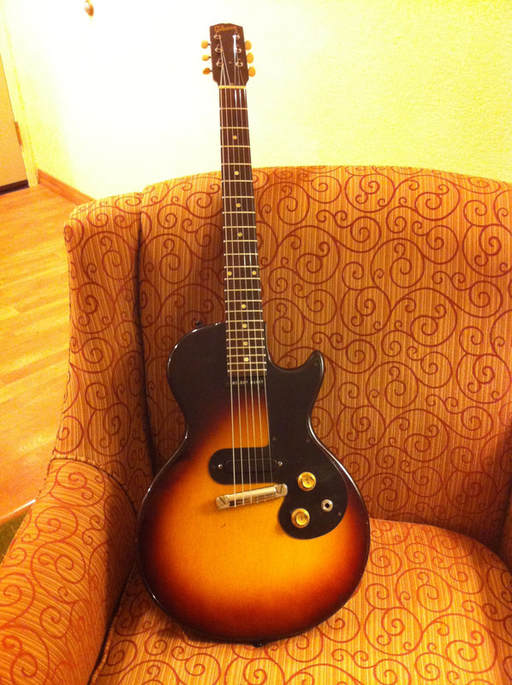 This  melody maker was the first one that kindled my love for them. By far the loudest guitar I own acoustically, and it has a neck to die for.

I keep this one off the stage for now, and use it mostly to record with, and try to play ZZ top songs in my underwear.  ​- John 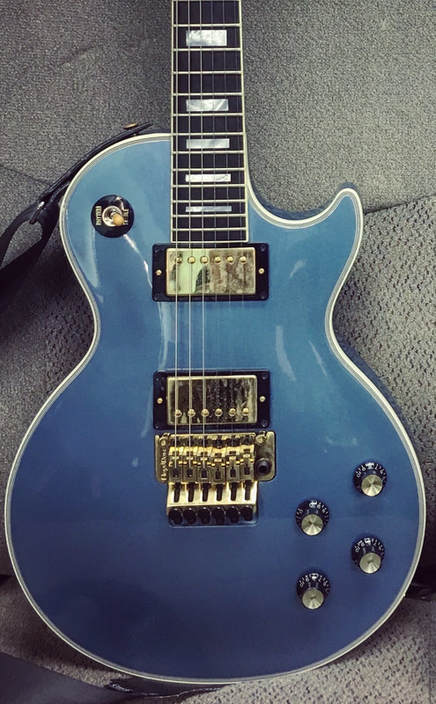 ​One of the elite shredders in the family, this "one off" Les Paul Custom Axcess was just too sweet all around for Dan to pass up. I'll post better pics of this one in time. Its a great guitar that turns heads for sure. 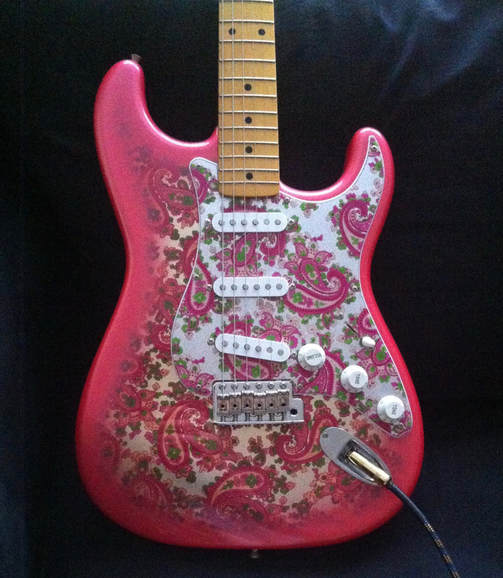 There is something to be said about the craftsmanship of Japanese made instruments. This strat has been a workhorse for me for over 10 years and stays in tune and ready for me. Staring at this guitar for years on end is what gave me the idea to have the Fender CS build out "Color over Paisley" heavy relics.
​I see they are quite a hit now... - John 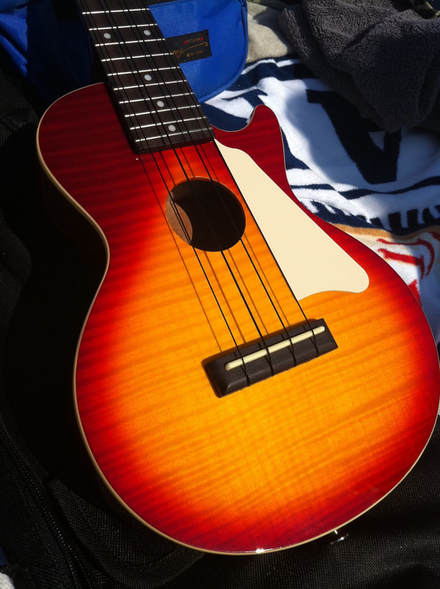 With a quarter inch input, a gig bag,  and a top like this, who wouldn't want one of these things for the $100? Great little uke, and so much fun to stare at. 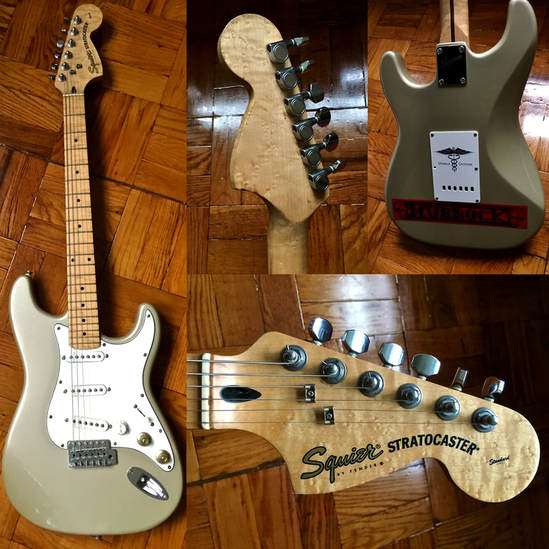 Squier Standard Strat Shoreline Gold
Sometimes you work at a guitar store. Sometimes you get thirty Squier guitars into the shop to sell. Sometimes one of those thirty will have a really flamey, birdseye neck that not only looks awesome, but is one of the best feeling necks you've ever felt. Sometimes that guitar has to come home and be your beater at college that your friends ash cigs on and puke on. Sometimes you have to modify the backplate with a VCR head so you can ZZ Top style spin the guitar 360 degrees from a hanging strap. Sometimes a guitar is just right and never leaves the family. - John 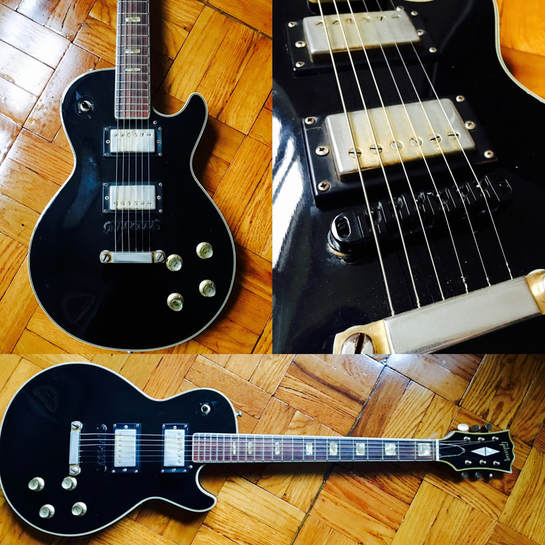 Vintage Black Japanese Les Paul Custom Copy
I picked this guitar up for $120 with a hardshell case from GC, and I couldn't be happier. This particular one needs some fret work, but the former owner put a serious roller bridge on it, and the guitar tunes impeccably. The reason I like this guitar so much though, is because it is the PERFECT couch guitar for anyone who loves Les Pauls. These old bolt on MIJ copies are basically hollow, so they weigh around 6 lbs, and they are acoustically loud without being as loud as an acoustic, hence the perfect sit around and play unplugged guitar. If you are reading this, and live in on Long Island or NYC, I can tell you where another one is sitting for $100 or so in a small shop in Queens. Dozens of brands slapped their names on these back in the late 60's/70's, but most of them are designed the same, and they rule. 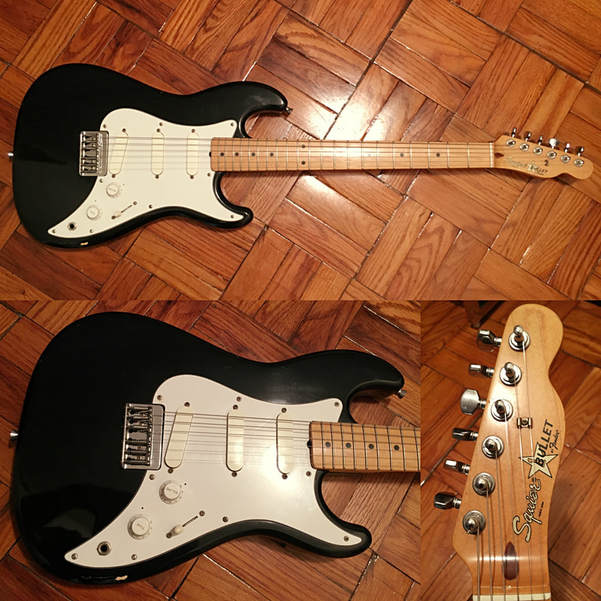 1983 Squier MIJ
Bullet Stratocaster
You can find these guitars for around or under $300 and boy they are fun to play. The pickups are not great, and its a slab body which sits weird with a strap (at least for me), but the necks on these guitars are incredible. They look super cool, and the quality is on par with what you would imagine any Fender MIJ guitar would be. When I sold guitars professionally, I would always highly recommend beginners and parents to buy cool used guitars like this to start, as opposed to a a "throw away" starter guitar that they will not use down the line. Let me know if you find a cool 1 hum bucker version, I'm always intrigued! - John 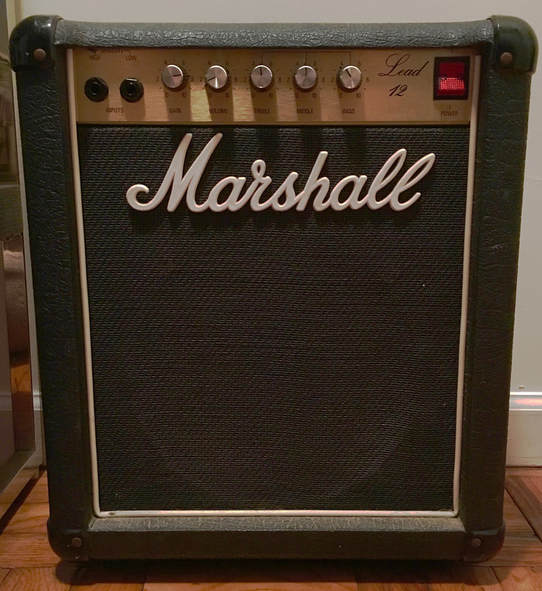 80's  Marshall Lead 12
I had always heard rumors about Clapton and ZZ Top, and many others using the Lead 12 amp in the studio, so when I saw one come through a friends shop, I had to hear it. This little amp lived up to expectations, and I use it myself in the studio, as well as my other Marshall head. This amp is great for "arena rock" distortion sounds. Its a bit nasally sounding which I like. The downside is that some of these sound great and others sound like crap. You really have to play the amp and see if its gonna work for you. An elusive version with reverb and a bass version are out there.
​I'm looking... - John 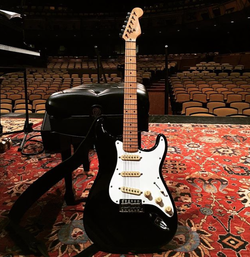 94 Squier Strat
It's always worth cruising the big box stores and playing all of the used guitars, because you might run right into something cool like this black strat. 23 years old and someone put big frets on it and loved it. This one played and sounded incredible and it was the cheapest guitar I've ever bought. As a testament to its awesomeness, while teching for Steve Miller for his  Blues Triangle shows at Jazz at Lincoln Center this past winter, he used this guitar for 4 songs in the set, both nights. I guess I won't paint it surf green anymore!
​- John