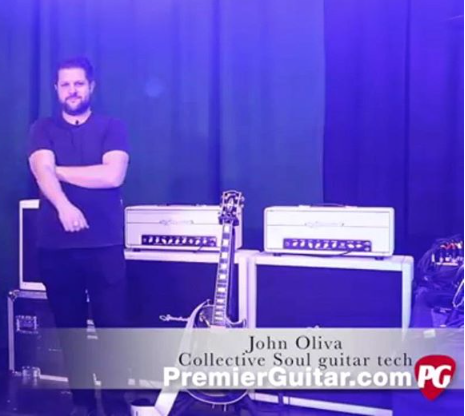 John Oliva is a journeyman in music.

He first fell in love with music as a child listening to his mother's records.  An interest in playing bass guitar and learning how to fix them sparked an 18 year tenure at the high end music retail store The Music Zoo. John worked in repairs, management, and sales throughout his years there. Before a stint of teaching lessons himself, John took bass lessons from NYC legend Paul Vario. With the knowledge he gained from Paul, John went on to SUNY Purchase and obtained his BA in music (studio production).

John went on to guitar tech and stage manage for a variety of bands and artists. Bayside, Collective Soul, Magic!, Switchfoot, Morningwood,  Steve Miller, The Cult, Hawthorne Heights, and Cyndi Lauper are just a few.

As a player, John has done session work for a few artists including Anthony Raneri of Bayside. In 2013 John joined I Am The Avalanche as their bass player. They toured the US, Canada, and Europe to support the album "Wolverines". Highlights include playing Groezrock festival, and playing on R!otfest. John fronts his main band Bombers, in which he plays lead guitar and sings.

When John's not center stage with a guitar and mic, laying down bass tracks in the studio, or downstage right with a guitar boat and tech box, he is usually side stage with a Heineken, checking the Yankee score on his phone while watching a great rock band. John hopes to bring his experience in guitars, fixing them, loving them, and collecting them, to you.